This is Part Three in a short series of trip reports aboard European ultra-low-cost carriers. To view Part One, click here, and to view Part Two, click here.

As explained in the previous article, the plan was to fly DAT from Catania, Italy to Olbia, Italy then return to Pisa, Italy in the same night. In June, Volotea opened a base in Olbia, so they had quite a lot of destinations from that city. Thankfully, Pisa was one of them.

Originally founded in Spain, Volotea is a small player in Europe, but one that saw considerable growth during Covid-19 in terms of trying different strategies and routes, as most ultra-low-cost carriers did, benefitting from a leaner structure and European Union rules that allow the free flow of foreign airlines within member countries, which, for example, allow Malta Air and Volotea to operate domestic operations in Italy. In January, it said goodbye to its last Boeing 717, reaching a fleet composed only of the efficient A319s and A320s.

Volotea has an awesome website, very easy to use and find the best fares for a specific route, though I think the calendar (as seen below) could be a little bit smaller, so the overview of dates could be easier and wider. The booking process and ancillary-dodging was also quite easy, and in few minutes, I had my ticket confirmed in my email inbox. 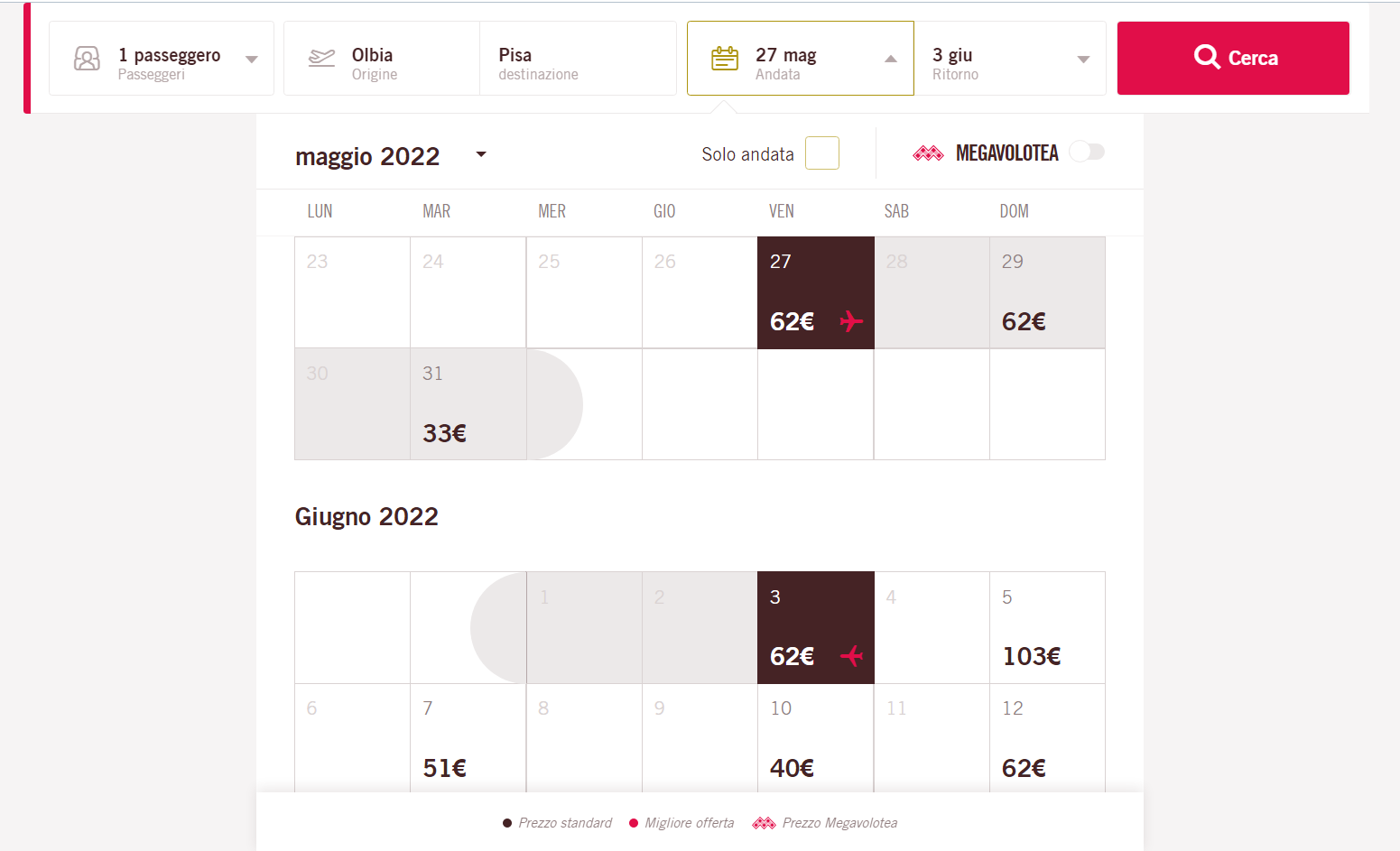 Following the local aviation news, it became clear to me that Volotea and WizzAir were struggling massively with their on-time performances in Italy during the summer, with the national Civil Aviation regulator even calling both out for their continued disruptive performances. So it came as no surprise to me when I received an email a month before my flight saying they had delayed the departure time 15 minutes.

However, I didn’t really buy their claim that the delay was “given the current context of uncertainty about the evolution of the Covid-19 pandemic.” Not everything in the world happens because of Covid, it’s nice to remember sometimes. 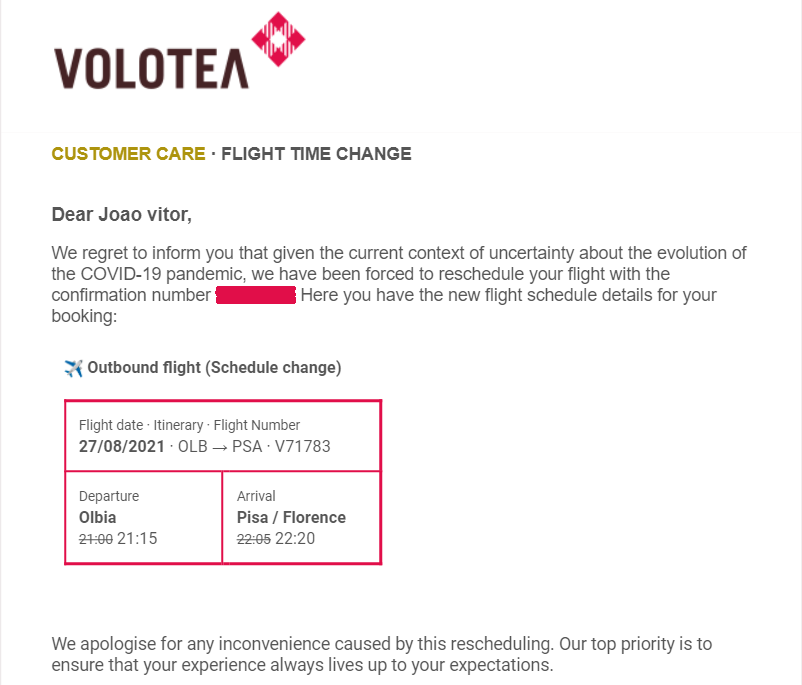 Email informing the rescheduling of my flight with Volotea. (Photo: AirlineGeeks | João Machado)

I also bought their food selection during the booking process for 5.65 euros, which was a sweet deal as I could then skip dinner by having hot noodles and a soft drink.

I arrived at Olbia Airport with a lot of time to spare. The terminal looked neat and quite comfortable even in the peak of the summer season. 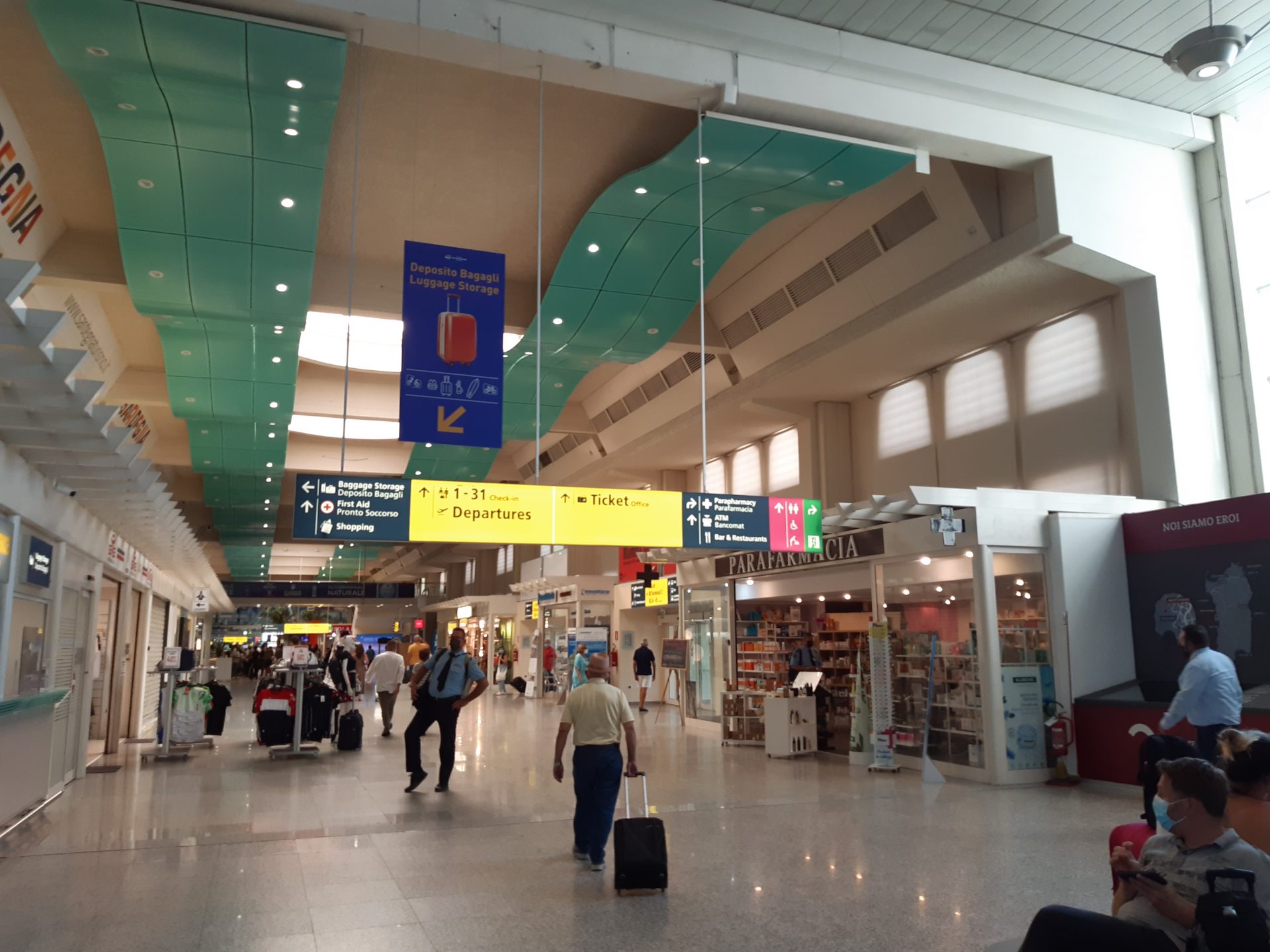 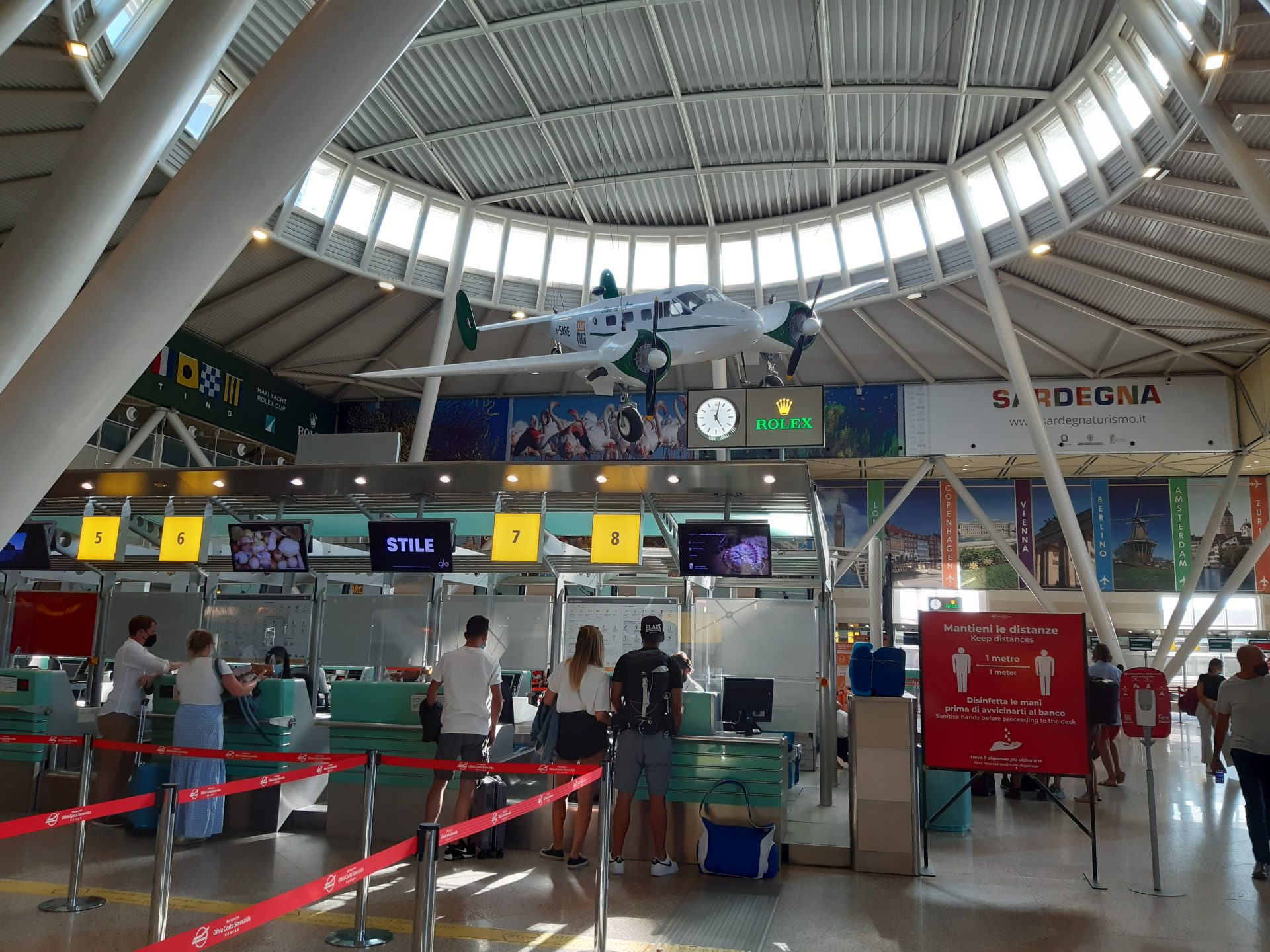 I really hope I can return with a little bit of time. 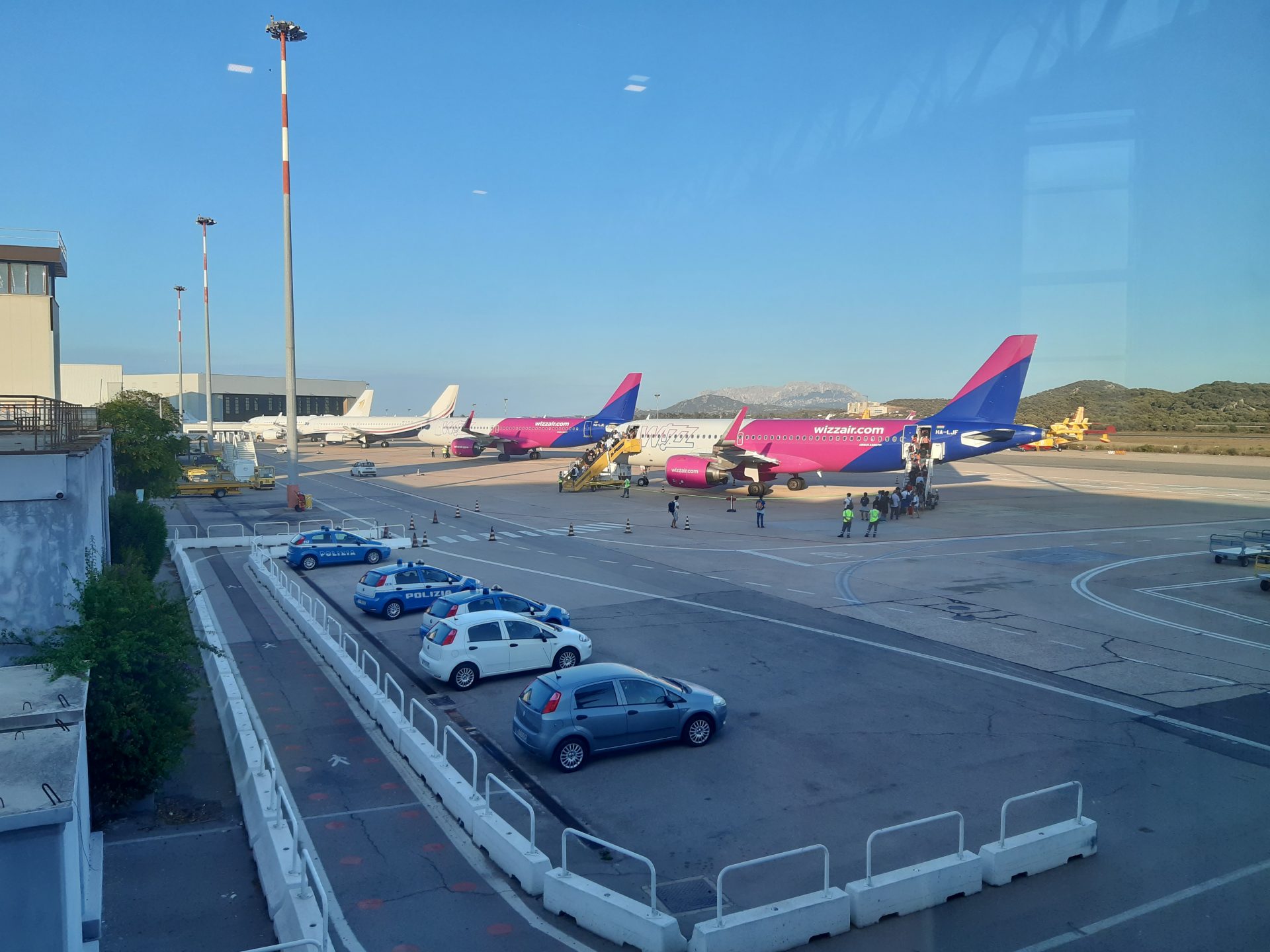 As the night fell and the time of the flight approached, I got to my gate, which was on ground level. This meant boarding would be in a remote position. It was full, but not excessively crowded. 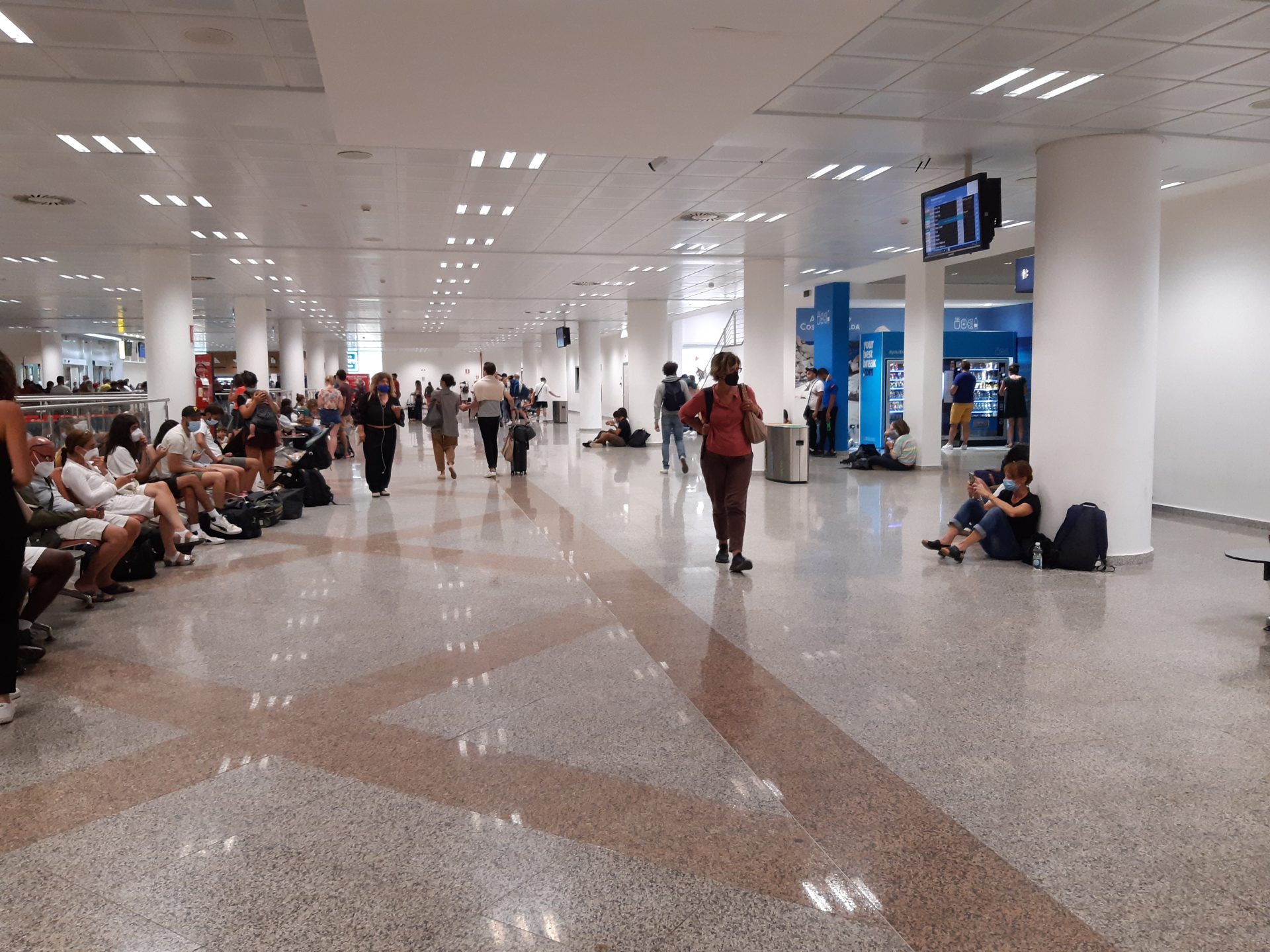 Boarding was called on time, however, and the passengers that were cleared started to get rounded up in two bays to the left and to the right of the gate, adjacent to the gate itself, while we waited for the buses. This generated unnecessary crowding. Why didn’t they just leave everyone in line waiting for the next bus? I don’t know. 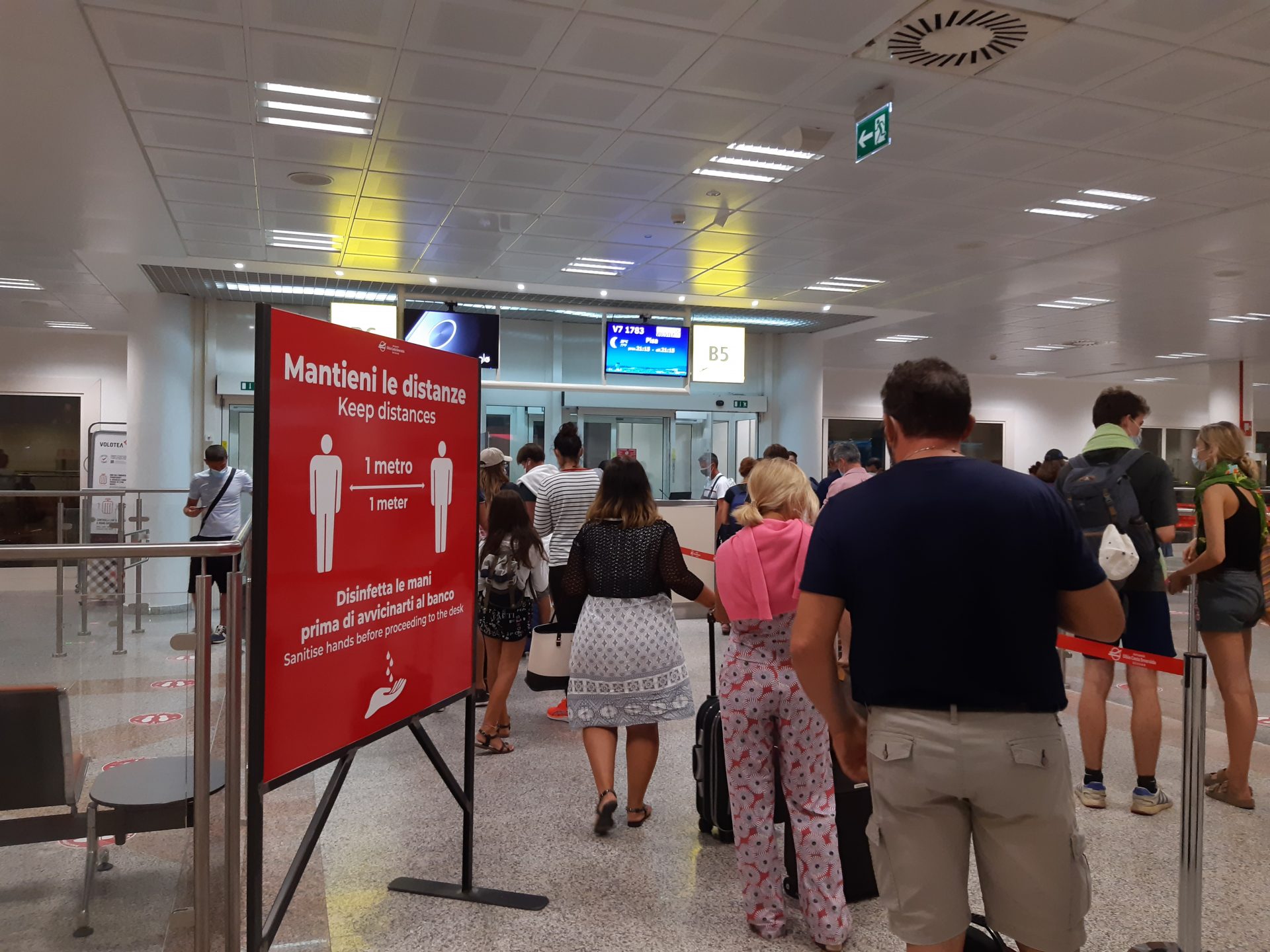 This is what I don’t get from airlines during the pandemic. They speak so much about having and following Covid-19 protocols, only to take actions like this and to crowd buses.

Anyway, tonight’s flight would be operated by EC-NON, an Airbus A320 that, according to Airfleets, was received by Volotea on July 1, in the same month I took the flight. This meant the cabin, already in Volotea’s standard, was really well maintained. The airframe was built in 2008 and was originally operated by Thai AirAsia, operating for the carrier until its phase-out in November of last year. 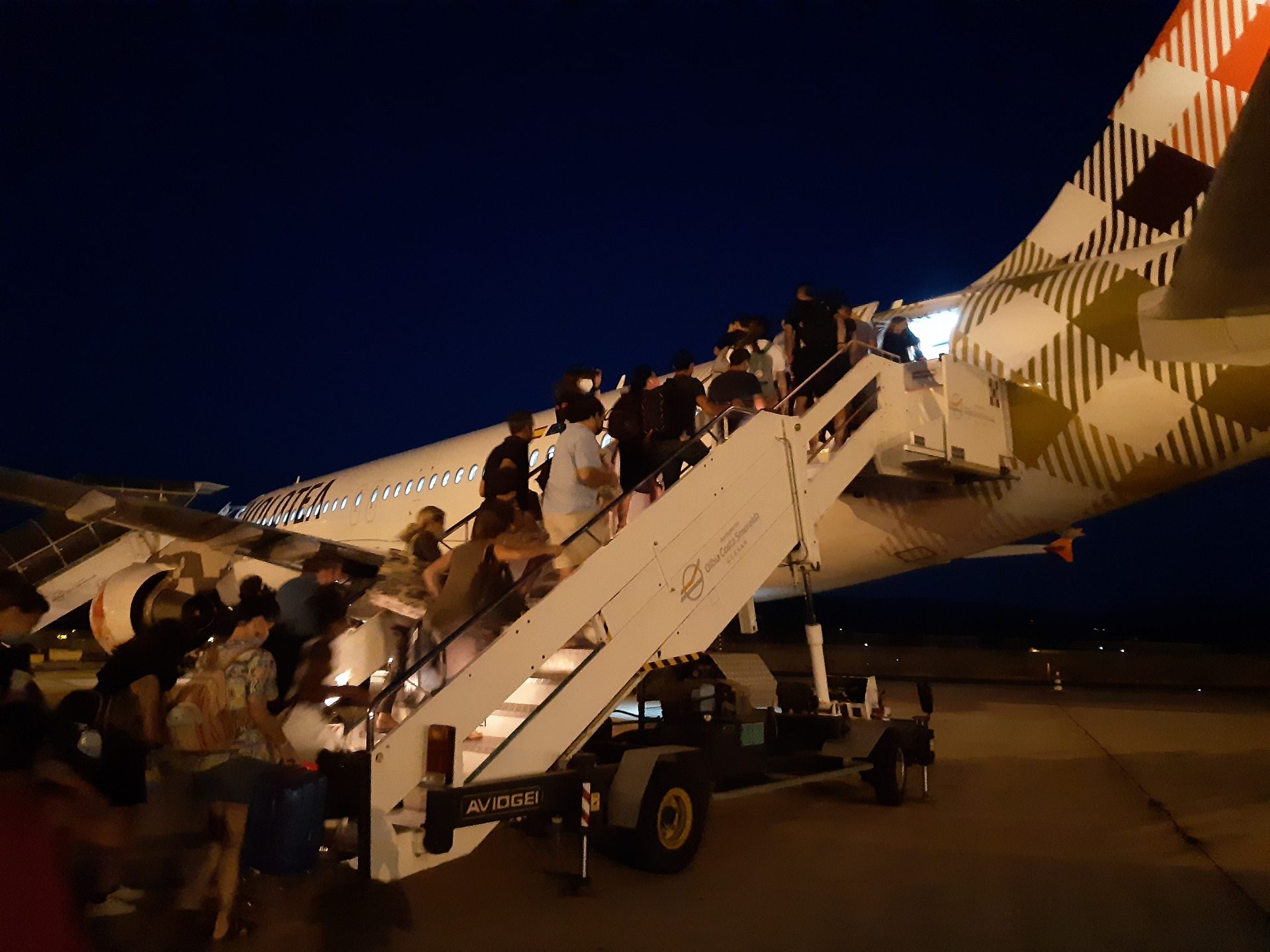 I quite liked Volotea’s cabin. It was pretty comfortable. Contrary to many ULCCs, that cram 186 seats into the A320, the airline chose to have only 180. The leather gave the 13-year old bird a very fresh look. 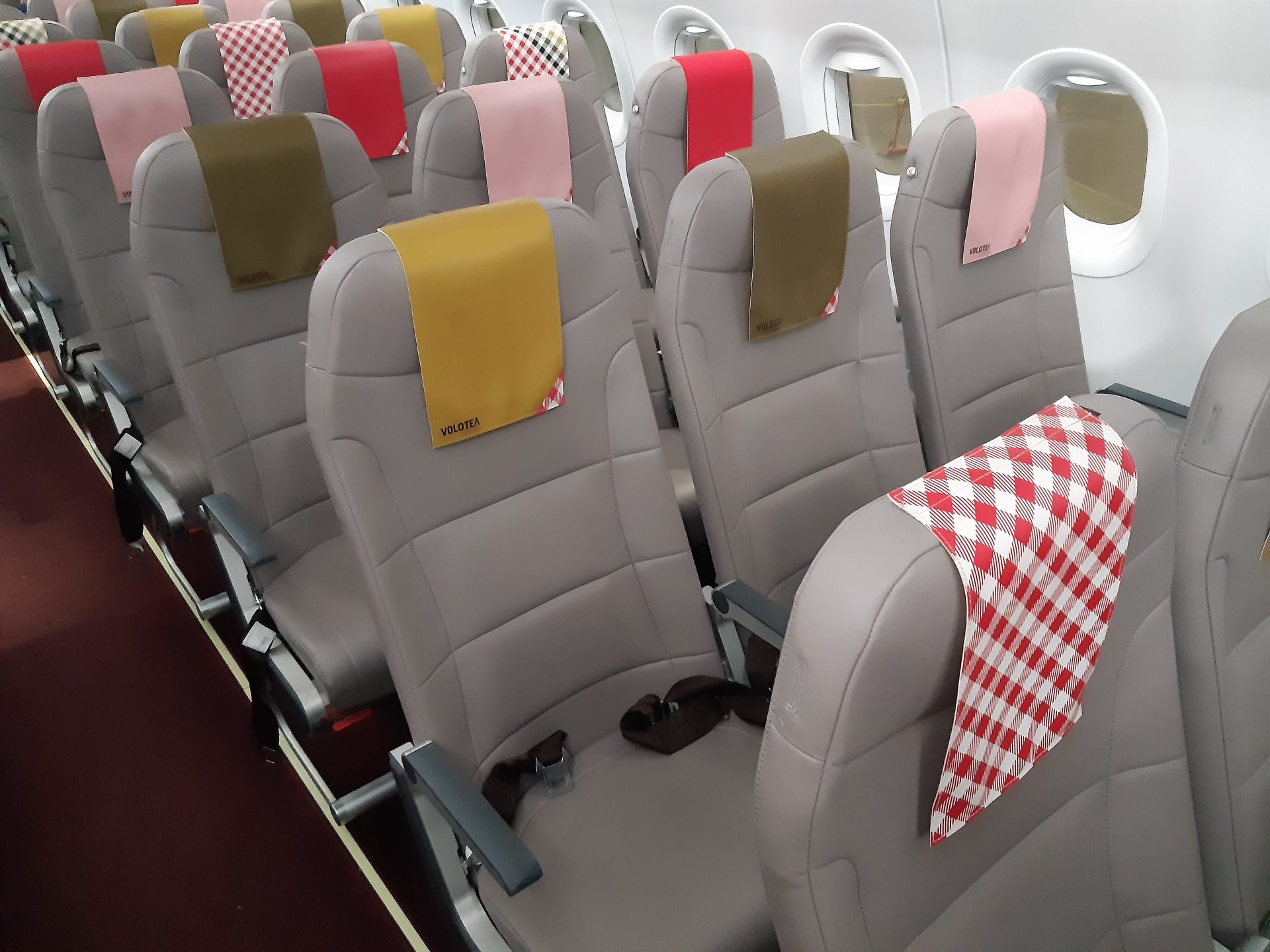 Seat pitch was alright, too, and the solution the airline found to avoid having seatback pockets was also quite smart.

I had been allocated seat 8C, on the aisle, and asked the flight attendant if I could pick a window. She told me after boarding was finished I could. 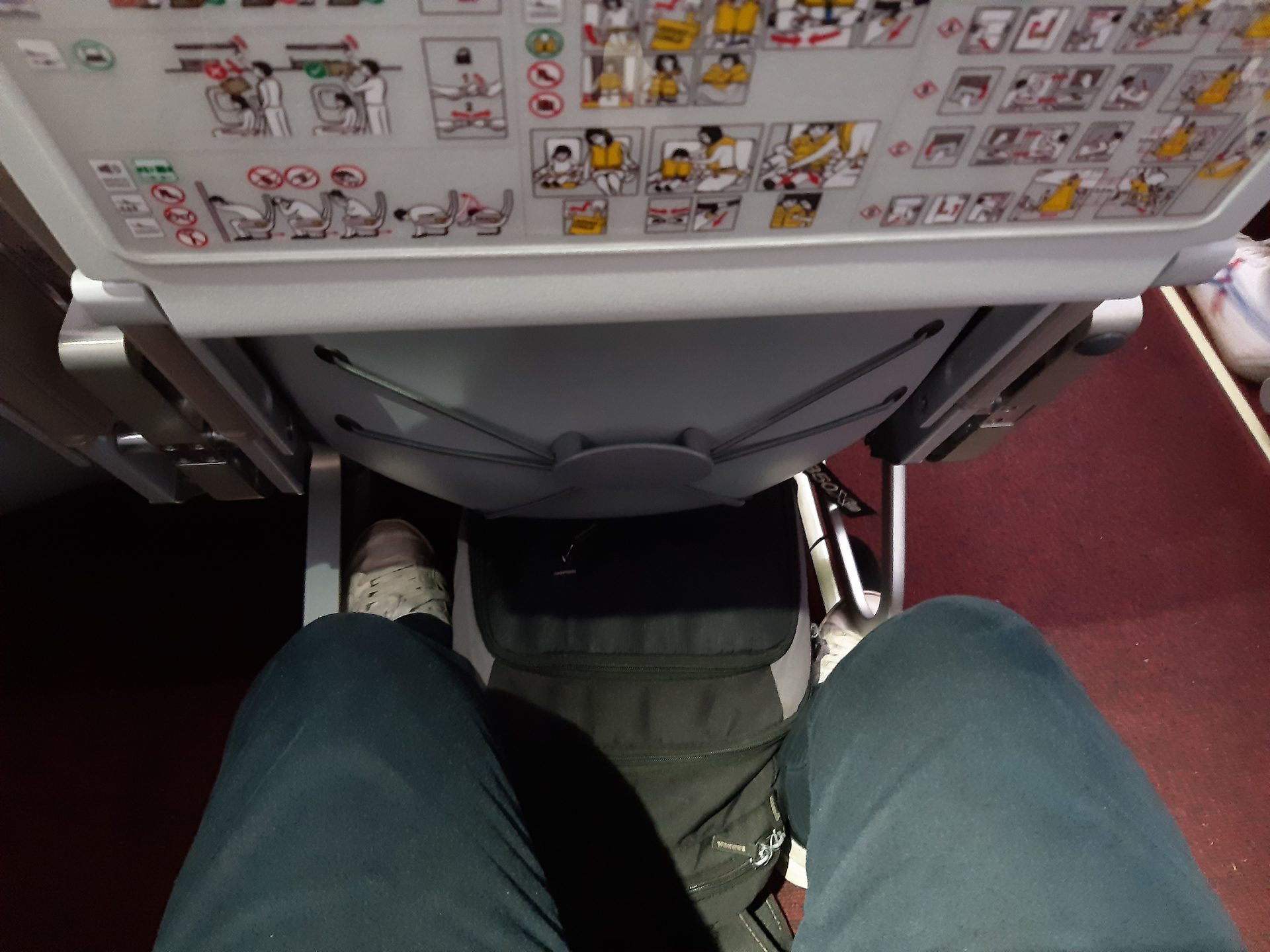 Doors were closed one minute before the scheduled time of departure 9:09 p.m. At that point, the flight attendant offered me an emergency exit seat, but I prefered to stay in 8C. The flight was quite full anyway, with 154 passengers making for an 86% load factor.

Soon after we were airborne, I opened my cellphone to try the mobile entertainment Volotea subtly promoted in their seatback advertisement space. 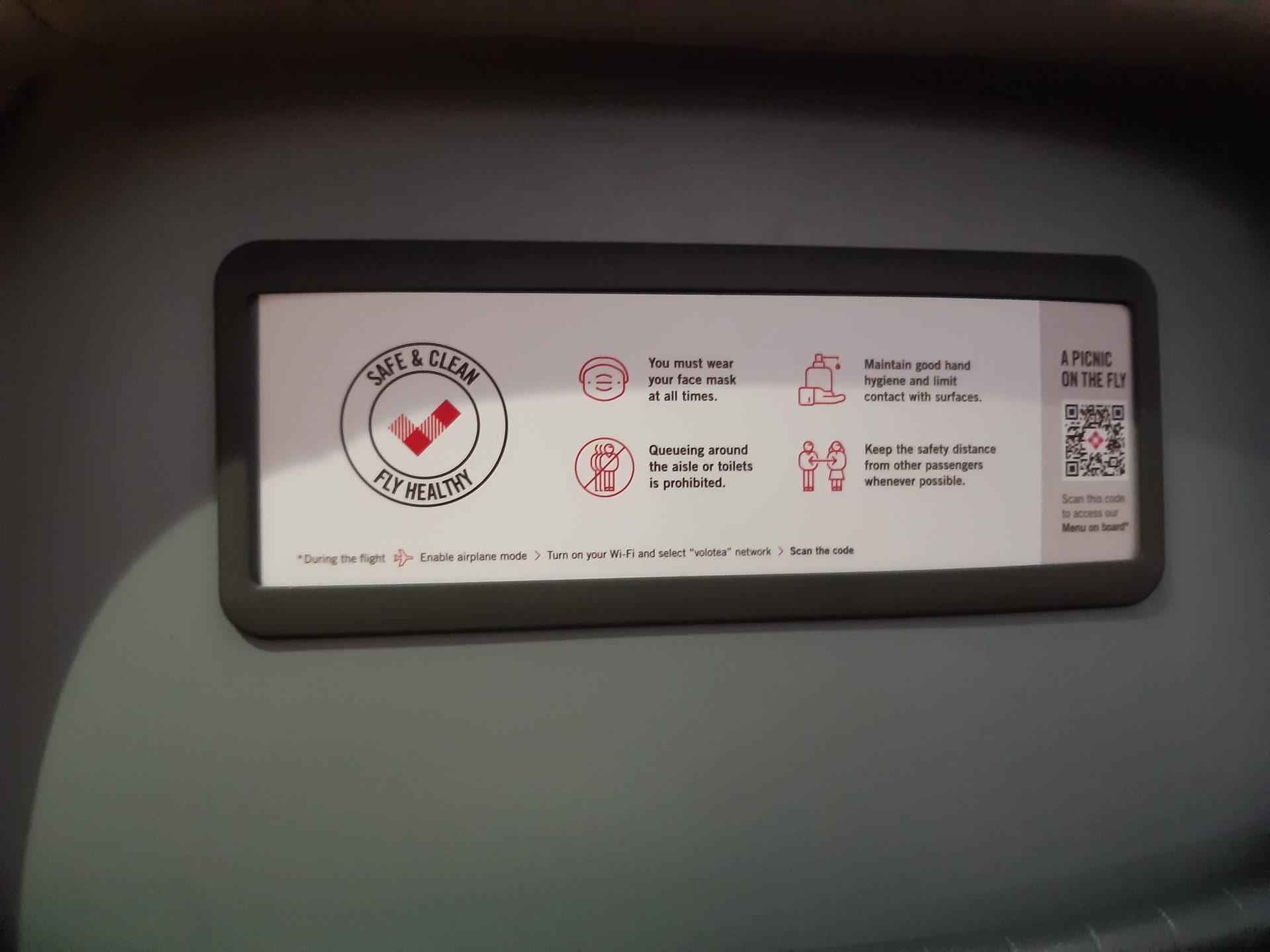 It did work. The interface was good, and so were the entertainment options, let alone for a short flight like this.

My entertainment option of choice, however, didn’t work properly, so I resigned myself to trying deciphering the safety instructions on the tray table. 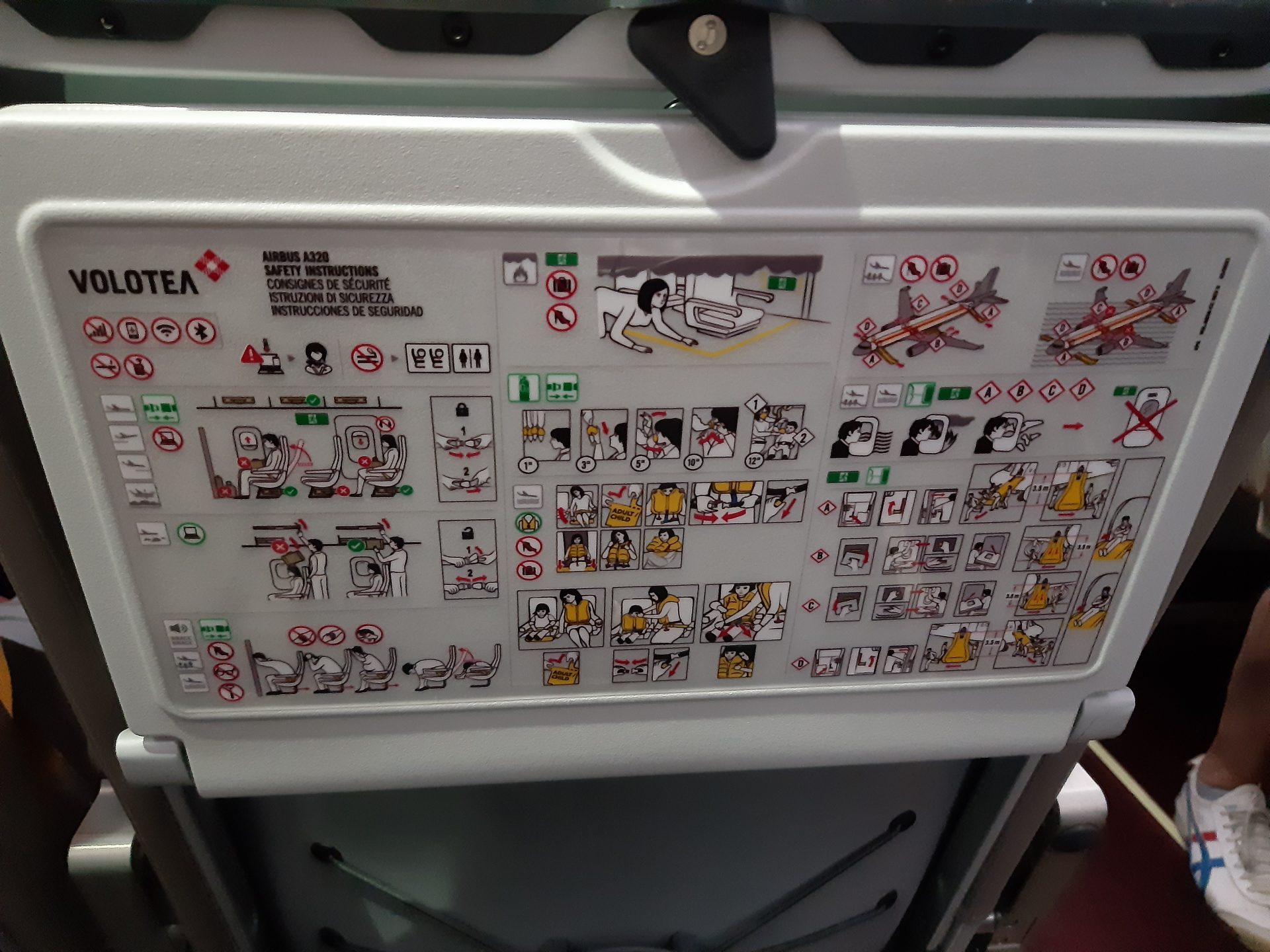 I was waiting to see how the service would work on a short flight like this. Unfortunately, shortly afterward the flight attendant said over the PA that, owing to operational issues, they would not serve anything, with the customers that pre-ordered their meals being refunded.

It’s a shame since the flight would arrive quite late in Pisa, and I’d prefer having spent that 5.65 euros on a meal and a drink rather than paying scam prices in the airport.

The rest of the flight was very uneventful. Soon descent was started and EC-NON made a smooth landing back in the Italian mainland at 9:59 p.m., 21 minutes before schedule.

A short taxi to the parking position followed, and the aircraft stopped. And there we went for a row-by-row deboarding only for everyone to be cramped in a bus to the terminal.

Anyway, I stayed a little to photograph the empty cabin. The flight attendants, who were Spanish and located in the Olbia base just for the summer, told me the food was actually not served because the flight was too short. Then why did they sell pre-ordered food in the first place?

Not only that, but Volotea was not capable of refunding the actual price of the meal. I had paid 5.65 euros for it and they only refunded 5.50 euros. Of course, that is nothing, but it shows a lack of care in a situation where things were mishandled. They should not have even sold that meal in the first place. Very disappointing. 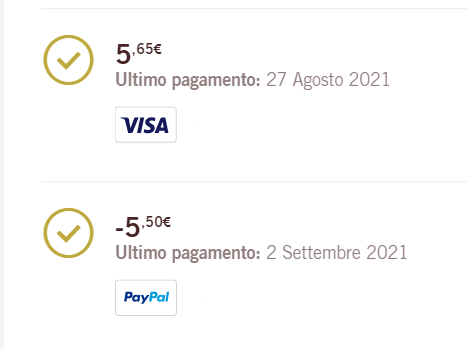 Apparently Volotea was not aware of the correct value I had paid them for the food they did not offer. (Photo: AirlineGeeks | João Machado)

Anyway, at least the flight attendants were in a great mood, and I got at least a glass of water while everyone waited for the next packed bus to the terminal. 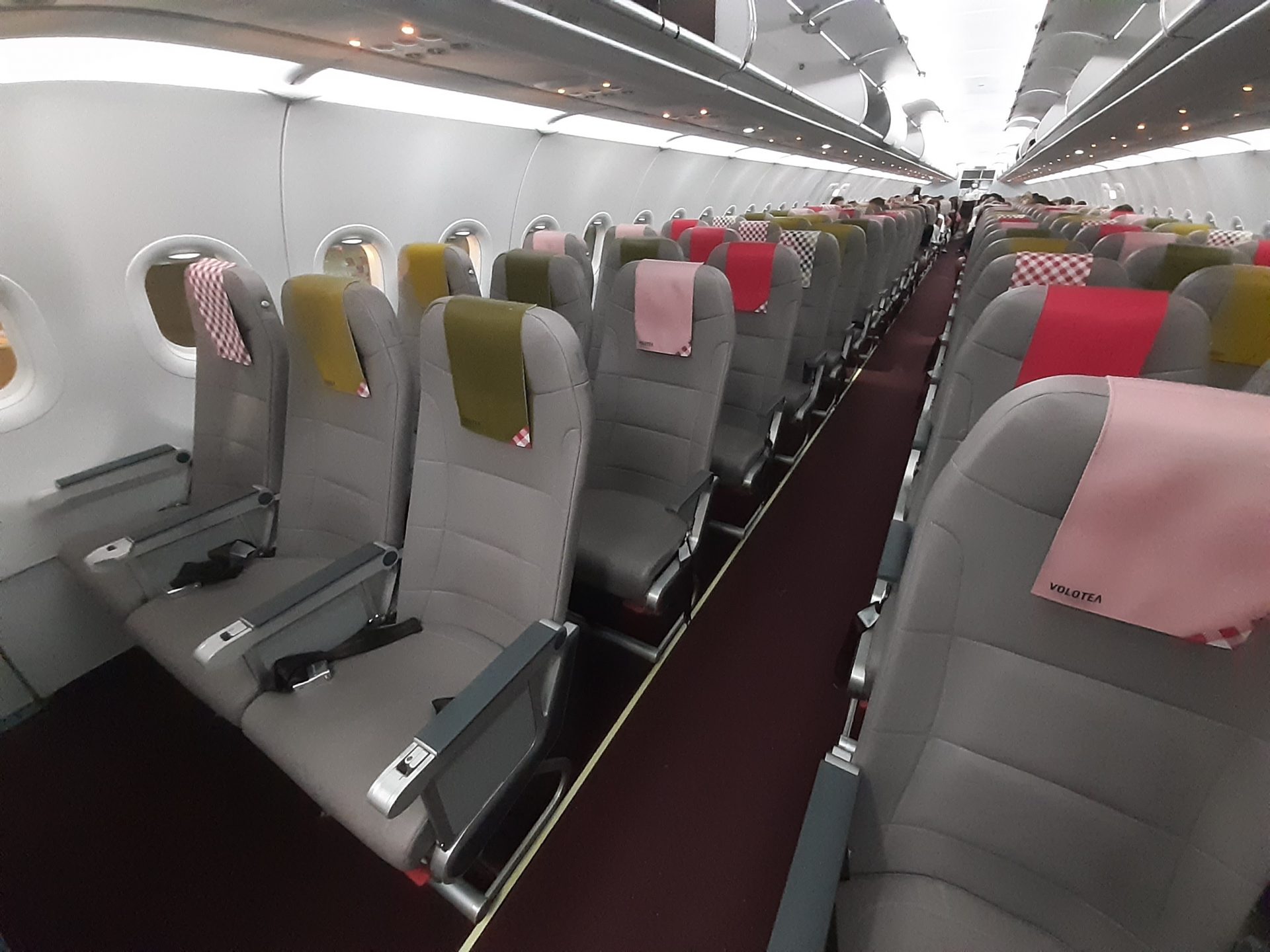 Soon I was on the bus, not without registering a detail I like about Volotea’s livery. All of its aircraft have this funny decal which say, “Mom, I’m arriving” near the door in the languages of the countries they serve. EC-NON’s was in French — “Maman, j’arrive”. 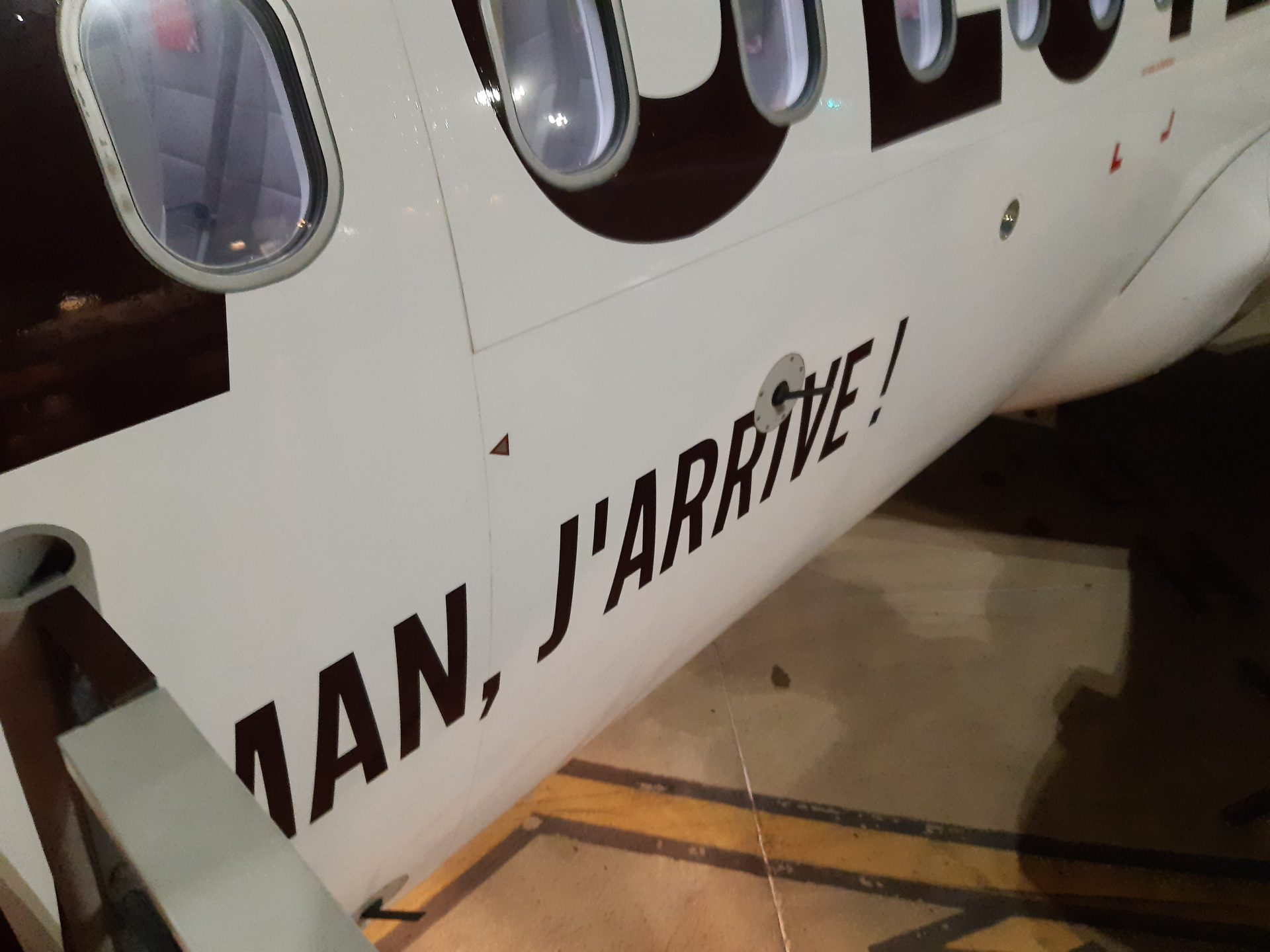 The bus trip was quick — Pisa is not a particularly big airport — and soon I was out of the airside in the overpriced bar, which thankfully was still open, having dinner.

Out of the three low-costs I flew, Volotea was the least impressive, perhaps because the flight was so short. Sure, charging for a meal you did not actually sell and then not returning the full value I had paid did not leave a good impression on me, but at least they got me from point A to point B — and what’s better, in time, a fear I had they wouldn’t.

All in all, they offered very good prices, the crew was cool and the cabin was comfortable. All things equal, I would opt for Ryanair or Wizz over Volotea, but if they can gain me on price or they are the only carrier in a route I’m looking at — as they were this time — I’d definitely fly with them again…I just wouldn’t risk pre-ordering a meal.