Mississippi was the 20th State of the United States of America. Most popular for the Mississippi River and the Gulf of Mexico as a bordering body of water, it’s presence in the American Aviation industry in terms of commercial aviation is very small. However, on a militaristic point of view, they play huge part within the Military Industry. Hosting five primary commercial airports and two non-primary commercial airports, the small presence in Mississippi is something to definitely look out for. 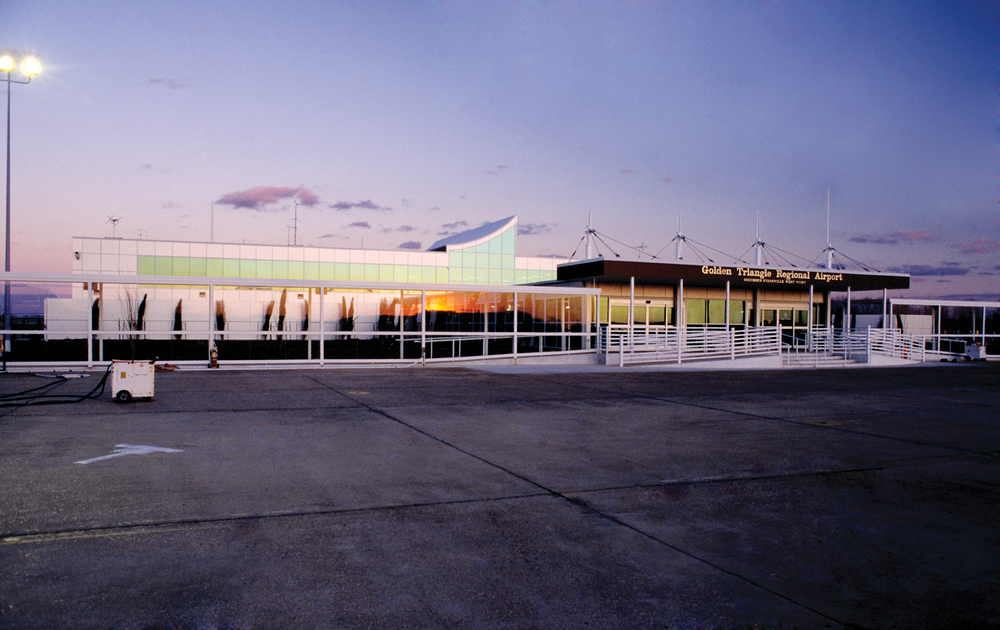 Golden Triangle is dominated by Delta Connection only and offers the only commercial flight from that airport to Delta’s hub of Atlanta Hartsfield-Jackson International Airport. The airport can take a Boeing B757-200 at the maximum, which would be beneficial for Delta if heavy loads were recognized. In the years of 2014-15, Delta Connection carried 37,000 passengers to Atlanta, showing a small demand for air travel out of Golden Triangle.

The airport covers an area of over 1,000 acres and has one runway designated as 18/36, which features an asphalt surface of 8,002 by 150 feet (2,439 x 46m). The regional airport is also home to a new industrial complex within northeast Mississippi. American Eurocopter, which is a subsidiary of EADS North America, ran by Airbus, moved into an 85,000 square foot facility in 2004 and later expanded the complex to 220,000 square feet of 2007, which completed their second phase of their project. This factory was built to manufacture and assemble the new UH-72A Lakota Light Utility Helicopter for the U.S Army.

Gulfport-Biloxi International Airport’s existence into the aviation industry originated as a training base for the United States Army Air Forces’ Air Corps Flying Training Command in 1942. When the airfield opened, the Eastern Technical Training Command participated in technical & basic training until they were transferred to the Third Air Force in March 1944. At the end of World War II, the airport was placed into reserve status until 1949 for use as a civil airport. Mississippi’s local authority negotiated airline service contracts with Southern Airways & National Airlines, which then provided cargo & passenger services to customers by the early 1950’s.

Current carriers at the airport feature Delta, American, United and Sun Country on a charter and seasonal basis. Delta Airlines have a high market share within the Gulfport market, carrying 48% of total passengers flying to and from Gulfport between May 2015 and April 2016. As of 2012, there were over 63,000 aircraft movements and 34 aircraft based at that airport. The airline was categorized as a primary commercial service airport between 2011 and 2015 as the airport had more than 10,000 enplanements per year.

Hattiesburg’s history is quite short and brief. There isn’t any particular information about the airport’s history other than from a photo taken in 1996 by the USGS (United States Geological Survey). The airport is classed as a primary commercial airport as it has between 12-13,000 passenger boardings per year. The airport covers an area of 1,170 acres and has one runway designated in an 18/36 layout on an asphalt surface of 6,501 by 150 feet (1,982 x 46m). The airport has an average of 103 movements per day, with 96% counting for General Aviation.

Only one commercial carrier flies into Hattiesburg, being American Eagle on flights to Dallas Fort-Worth and Meridian only. American Eagle carried 8,000 passengers to Atlanta between December 2014 & November 2015 as well as carrying 3,000 passengers to Meridian within that same time-frame. With the airport’s close proximity to the University of Southern Mississippi, the airport often handles larger charter airliners such as the Airbus A320 and Boeing B757, showing that it can take high passenger density based aircraft at that airport.

Named after the former Mississippi Field Secretary for the NAACP Medgar Evers, Jackson-Evers International Airport is a city-owned civil-military airport in Jackson, Mississippi. In March 2011, the airport was named the 8th best airport in a worldwide survey of passengers flying through the airport. It was the only airport in the United States to be ranked within the top ten in the world for best customer service.

The airport was opened in 1963, to replace Hawkins Field, which had been open since 1928. Southern Airways became the first carrier in the 1960s to operate from the airport with their Martin 404’s to Natchez, Vicksburg, Greenwood, Columbus, Laurel and New Orleans. In 1973, Delta’s Boeing B727’s flew nonstop from the airport to Atlanta, Birmingham, Dallas-Fort Worth, Monroe (LA), Montgomery (AL), Memphis, Meridian (MS), New Orleans and Shreveport. During the mid-80’s, Delta also flew their DC-9 aircraft nonstop to the same destinations as well as new routes to Memphis, Mobile & Monroe. By 1991, Delta had nonstop B727s, DC-9s & MD-88’s operating to several destinations across the United States from Jackson-Evers.

In the 1980s, there were signs of stability within the air travel market at Jackson-Evers. In 1979, Frontier Airlines launched Boeing B737 services direct to Little Rock with options to connect to Denver and the rest of Frontier’s network at the time. Royale Airlines also became an operator to the airport in the 80’s with routes to Natchez and New Orleans with their Gulfstream turboprops. By 1984 and 1986, Eastern Airlines had also joined the market within the airport’s portfolio of airlines and had nonstop B727’s to Atlanta & New Orleans as well as United Airlines operating Boeing B737 aircraft to Memphis. At the same time, a Continental Airlines affiliate began flights to Houston until 2013 (Which is now operated by United Airlines following the takeover of Continental).

By the 1990’s, the airport had expanded significantly and featured an office for U.S Customs to service any international flights and established a Foreign Trade Zone. During the 90’s, the airport welcomed services from US Airways, Trans World Airlines, Valujet & AirTran Airways. By 1995, American Airlines downgraded services to their American Eagle subsidiary and by 2004, Delta provided services to Atlanta & Cincinnati only. In 1997, Southwest Airlines began services to Jackson from Baltimore, Chicago-Midway, Houston-Hobby and Orlando before withdrawing services in 2014.

To the present day, five carriers operate out of Jackson. American Eagle, Delta Airlines, Delta Connection, Southern Airways Express and United Express. In 2013, the airport took 7,520 commercial aircraft (Averaging at around 20 commercial flights per day) and serviced over 53,000 aircraft (Averaging around 145 per day). To this very day, the 172d Airlift Wing of the Mississippi National Air Guard has also maintained an Air National Guard base at the airport also and currently operate C-17 Globemaster III aircraft.

Meridian Regional Airport is an airport based 3.5 miles southwest of Meridian City. Meridian Regional Airport opened in 1930 after taking two years to build a hangar, powerhouse, and a dirt runway. It was an airport that was nearly abandoned due to the Great Depression and lack of funds. Deliveries by Airmail were tapered off and very few people could afford to take commercial flights or pay for flying lessons, showing a pilot shortage crisis. The airport covers an area of 1,000 acres and has two runways, designated as 1/19 (10,003 feet by 150 feet – 3,049 x 46m) and 4/22 (4,599 feet by 150 feet – 1,402 x 46m). Mid Delta Regional Airport is a small non-primary commercial service airport located five nautical miles northeast of Greenville. The airport is home to two Asphalt Surfaced Runways between 7-8,000 feet, with one runway having a precision approach runway with an Instrument Landing System. The airport is situated on 2,000 acres of land and is a controlled airfield between 7:00am and 7:00pm, seven days per week.

At the moment, the airport is monopolized by one small American carrier, known as Boutique Air. Boutique Air counts for 87% of all passenger traffic departing and arriving at Mid Delta. There was another carrier that operated at Mid Delta known as SeaPort but only accommodated for 12% of traffic and only operated to Memphis whereas Boutique Air gains most passenger traffic from their services to Nashville International and Dallas-Fort Worth International. SeaPort ceased operations in May 2015. Tupelo Regional Airport is an airport that has descended from a primary commercial airport to a non-primary commercial airport in the space of a few years. From 12,749 enplanements in 2010 to just 3,720 in 2014-15, the airport has had a rocky few years due to SeaPort suspending services as an airline in September 2016. SeaPort was the airline that monopolized the Tupelo market, counting for 100% of all passenger traffic. Due to the services suspending, Contour Airlines now operate out of the airport to Nashville.

Overall, the airport has some nicely sized airports. Like with South Carolina, they are a state where the airports are slowly growing but at the same time, they need to make sure that in some airports, their passenger numbers are not dropping.