ANA’s first A380 after rolling out of the paint shop (Photo: Airbus)

ANA’s Turtle-themed A380 Rolls Out of the Paint Shop

One of the three Airbus A380s on order to Japan’s All Nippon Airlines (ANA) has rolled out of the paint shop in Hamburg, completing a 21-day paint job featuring the blue turtles of Hawaii.

Design of the livery for the double-decker was part of a competition in 2016 where the airline received over 2,000 entries, with the winning entry was the turtle family theme.

This A380 which features the Hawaiian Sky ANA Blue scheme has been dubbed the ‘Flying Hunu,” which is a term used towards the sea turtle, a symbol for good luck, which reflects the affection the Hawaiian people have for the animal.

Yutaka Ito, ANA’s executive vice president, said in a press release: “The Airbus A380 will be an important addition to ANA’s current fleet and it will allow passengers to reach the scenic islands of Hawaii in comfort and style. The customized livery adds a personal touch that will make the trip that much more memorable.”

The two other aircraft will feature a Hawaiian Ocean Emerald Green and a Hawaiian Sunset livery. 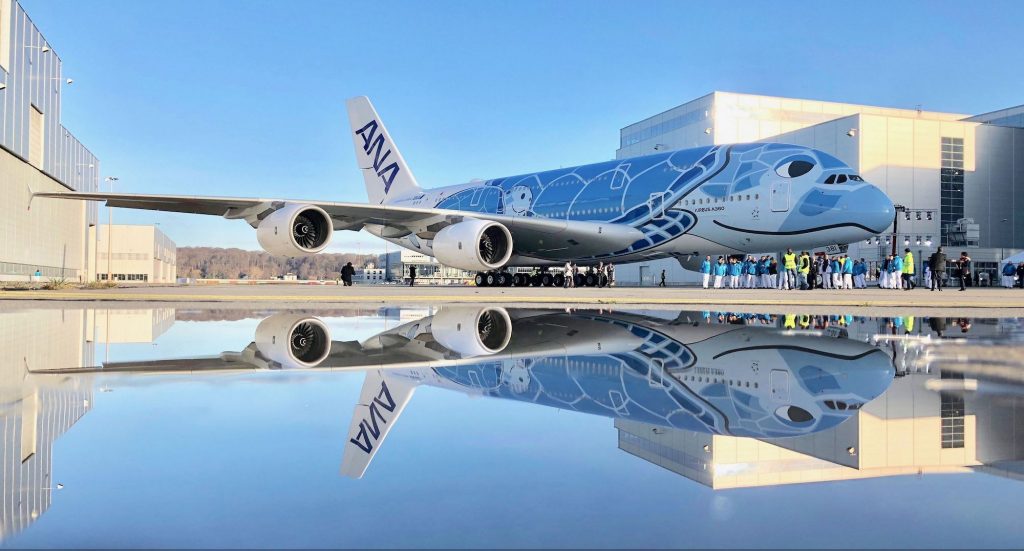 ANA’s first A380, featuring a special livery, rolls out of the paint shop in Hamburg. (Photo: Airbus)

ANA’s A380 will now undergo the cabin interior installation, which will feature 520 seats, including eight first class, 56 business, 73 premium and 383 economy.

The first passenger flight is expected on May 24, 2019, and will serve Tokyo Narita Airport to Honolulu, with ANA being the only Japanese airline to operate the aircraft.