This week marks another first for Boeing as the aircraft manufacturer delivered its first Boeing 737 MAX 9 to the model’s launch customer, Thai Lion Air. Boeing held a delivery ceremony on Wednesday in Seattle at the Seattle Delivery Center at its own Boeing Field to commemorate the delivery, which comes just under a year after the first delivery of the Boeing 737 MAX 8 in May 2017.

The launch customer for the newest single-aisle aircraft to be delivered by Boeing, Thai Lion Air, is a low-cost subsidiary airline of the Indonesian low-cost airline Lion Air, also the parent company of Malaysia’s Malindo Air which took delivery of the first Boeing 737 MAX 8 last year.  Based out of Bangkok’s Don Mueang International Airport, the Thai capital’s secondary airport, Thai Lion Air operates low-cost flights both domestically and throughout Southeast Asia. 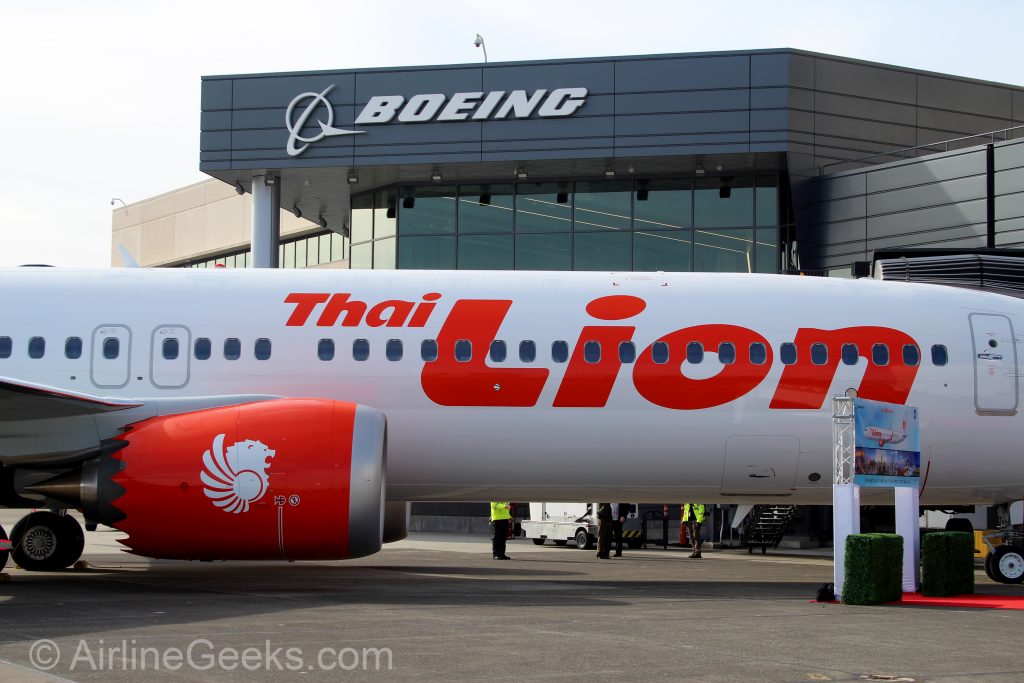 According to the airline, the addition of the Boeing 737 MAX 9, the third largest MAX aircraft in the series, will be the backbone of its expansion as it moves to increase capacity on its flights while also maintaining low operating costs. The airline is also planning to use the MAX to launch its newest international routes to other Asian countries.

“The 737 MAX 9 is a perfect fit for our growing business in Thailand,” said Capt. Darsito Hendro Seputro, CEO and Chairman of Thai Lion Air. “The 737 has been the backbone of our business since we began and we will use the added capacity the airplane provides to expand our network and start additional routes to Bangladesh, China and India.

Both Thai Lion Air and its parent Lion Air already have a strong history with Boeing. Both airlines’ fleets are comprised mainly of Boeing 737 Next Generation and MAX aircraft, save for the small number of A330-300 aircraft that both use for their long-range operations. While Thai Lion Air only has 9 MAX 9 aircraft on order, the combined Lion Air Group has 200 additional MAX aircraft on order, making the group one of the largest Boeing 737 operators in the world when factoring in its current fleet of Next-Generation 737s. 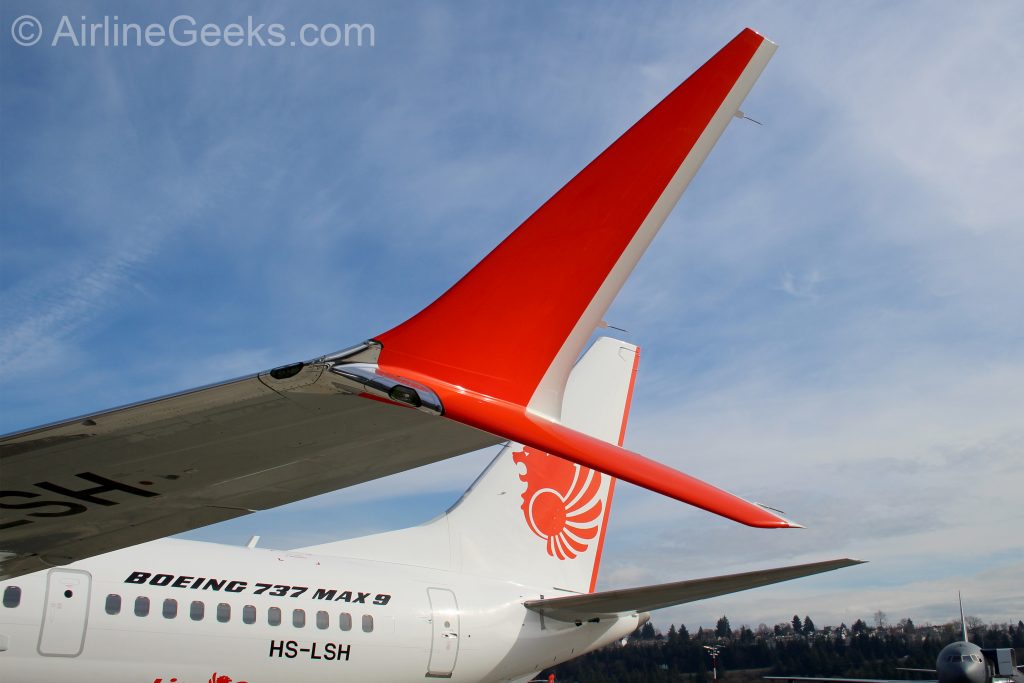 “The Lion Air Group is the perfect example of how the 737 MAX family provides a common fleet solution across the single-aisle spectrum,” said Boeing Commercial Airplanes president and CEO Kevin McAllister. “Not only will Lion Air Group benefit from the MAX’s range and capacity, they will enjoy the best economics and reliability in the industry.”

The popularity of the MAX with the Lion Air Group is no doubt a testament to the effectiveness and cost-savings that airlines are realizing with the aircraft, as promised by Boeing. With Lion Air and its subsidiaries maintaining strong ties to the Chicago-based aircraft manufacturing, it’s no surprise that Thai Lion Air was the launch customer for the MAX 9. This delivery was undoubtedly the first of many to Thai Lion Air and the Lion Air Group as a whole. 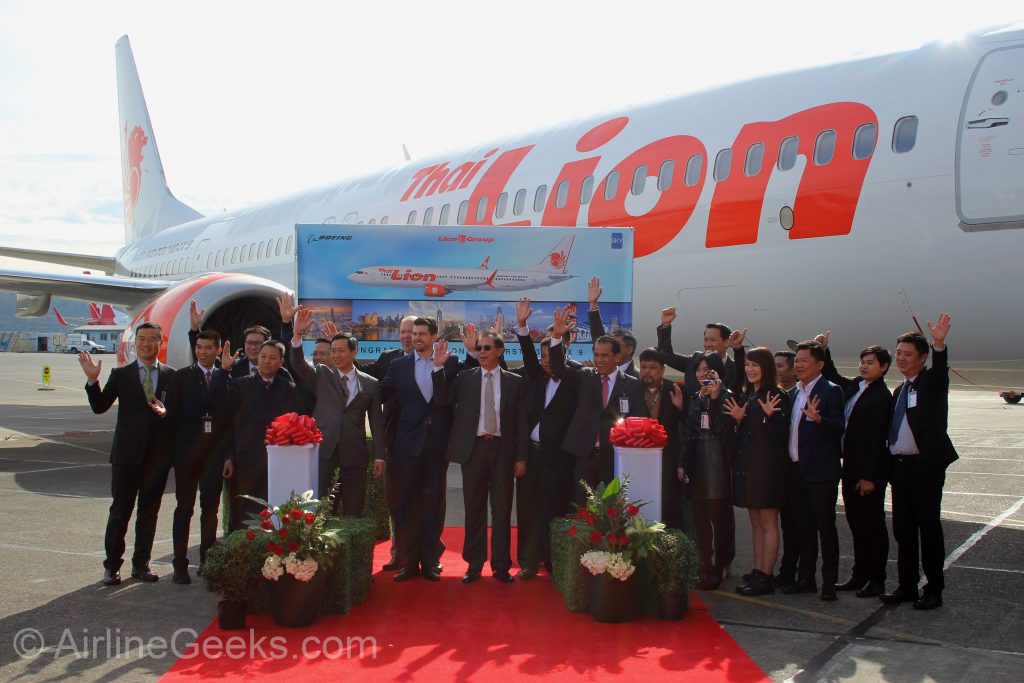 The delivery celebration for the first 737 MAX 9 (Photo: AirlineGeeks | Huy Do)

The Boeing 737 MAX 9 is the MAX-equivalent of the Boeing 737-900/900ER. Incorporating the newest aircraft engineering technology, such as CFM International LEAP 1-B engines and Advanced Technology split scimitar winglets, the MAX 9 is able to fly at a range of 3,550 nautical miles while carrying a maximum of 220 passengers. In the United States, United Airlines has already announced its routes for the aircraft, which it expects to begin domestic operations in June.

These last few months have been exciting for Boeing, as the smallest variant of the MAX series, the MAX 7, took flight for the first time from Renton to Boeing Field just weeks after being unveiled, the 10,000th Boeing 737 aircraft was delivered to all-Boeing carrier Southwest Airlines and the Boeing 787-10 Dreamliner received FAA certification.

According to a social media post by The Commercial Aircraft Corporation of China(COMAC) on July 23, the COMAC C919 has completed all flight test tasks and is in the final certification phase. The completion marks a significant milestone for the program and could mean certification in the coming months. For reference,…